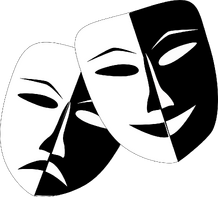 Drama GCSE with all exam boards involves around 60% controlled assessment / coursework, and so is difficult to arrange for private candidates. The exam centre has to mark this coursework itself, and few schools will consider this unless you are a pupil there. A few theatre schools and home education groups offer GCSE drama, so ask on local home education groups to find out if there is anything in your area.

Often home-educated students take alternative qualifications, such as dedicated drama exams instead, and these are usually accepted to get you onto Level 3 courses in drama at college or sixth form (check with their entry requirements and if in doubt, speak to the department head). Often school pupils are unable to take GCSE drama because of timetabling problems or if their school doesn't offer it, so there is always an alternative pathway to further study in this subject.

In some areas, GCSE Drama is offered at weekend or after-school classes. Here are some - if you find others, please add them by editing the page or putting a comment in the box at the bottom.

Some home educators have arranged to take Drama GCSE in groups with a tutor - The Otherwise Club in North London for example.  It is worth asking on your local Home Education email group and on the HE Exams Yahoo group, and any other groups you are on e.g. Facebook pages, to see if a group might be available to you. However, do ensure that the group has a examination centre arranged and has a commitment in writing from the centre. Unfortunately, groups have been let down before by schools where staff wanted to help, but in the end could not get permission from their management to accept students for GCSE drama.

The only Drama IGCSE available in the UK is offered by CIE and the specification states that it is not available to private candidates. However, you may find a stage school which offers it as part of a course.

There are alternative drama qualifications at GCSE level which you can do through private classes, for example at drama and performance centres. Trinity College, LAMDA and New Era Academy are well-known drama exam boards which are accredited by OFQUAL. (For more detail about the levels and equivalences see the Gov uk page What different qualification levels mean

Some alternative qualifications are listed as an "equivalent" level to GCSE, but it does not mean that colleges and sixth forms will accept them in lieu of a GCSE for their entry requirements. Some drama awards carry UCAS points, but again, this does not necessarily mean they can be used a substitute for A levels when applying for a course. Please check with the college or uni course you wish to apply for.

Trinity College, London - offers drama-related awards in Acting and Speaking, Communication skills, Musical theatre and Performing arts, and diplomas in Drama and Speech. (As well as qualifications in dance, rock and pop, and art)

Standard and regulation of Trinity exams is here[1]

You could also do the Trinity Arts Award specialising in Drama - see Art for more information.

"Stagecoach Performing Arts offers [LAMDA and] Performance Arts Awards (PAA) in Musical Theatre. Grades 4 & 5 are Level 2, Grade 6 - 8 attract UCAS points. Could be useful if wanting to do BTEC or degree in this field and also great as confidence builder. Other organisations probably also offer it - but no experience of others."

One benefit of taking a drama qualification through these boards is that you can specialise in different areas, with more choice: e.g. Musical Theatre, Shakespeare etc..

One parent comments: "I did New Era Academy exams as a teenager and found it much more interesting than the GCSE drama that I did at the same time.  I liked the transparency of the system, and the fact that I was marked on my own work alone; in GCSE, if you have to put on a group performance then the overall standard of the group will be dependent on all its members, not just your child."

There are many drama groups which home-educated students can join in order to gain experience of working in group performances.  Some adult amateur dramatics groups may accept younger members.

The Stage - What drama training options do school leavers have?

Community content is available under CC-BY-SA unless otherwise noted.
Advertisement